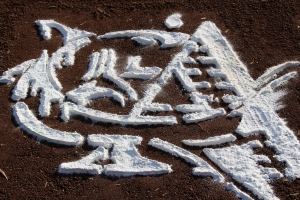 Mahalo Sonny for the (c) design & Mahalo Mikey for the field cut-out!!

As we prepared at the end of the 2014 year for the Classic, we had new ideas in place for a better tournament which would benefit everyone from our keiki, families, participating teams and fundraising.  This year we added a new twist which was comprised of running the Classic over a span of two weekends.  Great idea, but one problem though, we had interest from the outer islands which would make things a little tougher on travel.  “Not a problem”, replied one of our leaders, “We’ll make it work!”, and that we did!  With all of the great leaders and wonderful ‘ohana that drives Hui ‘Aumākua Baseball, we were able to make it happen! 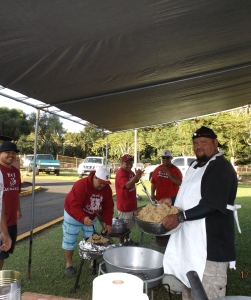 On January 2nd, we started pool play for the Bronco and Pony divisions.  We were blessed with beautiful weather and great baseball.  We welcomed Maui’s Pono Baseball and Outlaw Baseball from O’ahu (Aiea) as they stepped off the plane that morning and showed up to the field to showcase their talents and that they did!  Maui entered teams in both the Pony and Bronco divisions while Outlaws competed in the Bronco division. To round out the Pony, Bronco, Mustang and Pinto divisions, we also had teams from all over the island which included Lil’ Soljahs and Alaka’i from Kona, Elite from Waimea, and from Hilo, Andrews Braves, RBI Red, Andrews Indians, Andrews Chiefs, RBI, Lincoln Wreckers, Keaukaha, and don’t forget Da HUI!  Pool play went smoothly as everyone got their 2 games done on Friday. 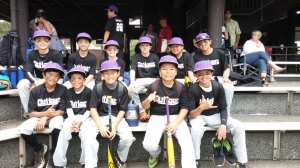 Bronco Division – Outlaws in the Hale! Let’s do this!

The championship round started on Saturday for the Bronco’s and Pony’s while the Mustang’s started their pool play on Saturday!  As Saturday came to an end, the finals were set for a showdown between Maui and our own Hui ‘Aumākua in the Bronco Division, which could be a prelude to a summer showdown for the Bronco State Title which will be held in Hilo this summer!

In the Pony division, Andrew Braves and Andrews Indians were set to meet for Bragging Rights in Hilo!  Our Hui Pony made it to the semifinals and fell in a great effort to Andrew Indians and played in the 3rd place game on Sunday versus RBI!  Saturday was not done though!  Through the great help of our families, coaches and various “silent” boosters we have, we put on an awesome spread for our Maui and O’ahu families and players at the complex!  There was food for days as we had music, fellowship and memories for a lifetime.  Big Mahalo’s to all that made that possible!

Pa’ina! This is how Hui hosts our baseball brothers! 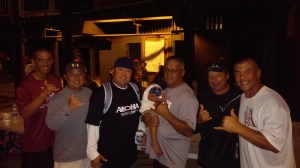 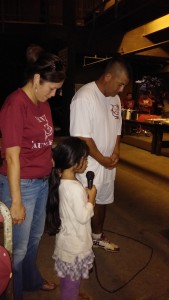 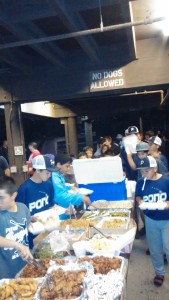 Sunday morning was upon us with the consolation, 3rd place and championship games to come!  A lot of coffee and fried rice kick started our morning and let the games begin!  In the Consolation games, Maui Pono came out victorious in the Pony division while Alaka’i took home the win in the Bronco division.  Our own, Hui ‘Aumākua Pony had an exciting game against RBI in the 3rd place game and came away with the victory!  Great job coach Grant, coach Earl Jr. and staff!  Looking forward to an exciting spring and hopefully, long summer!  Go get um gang! 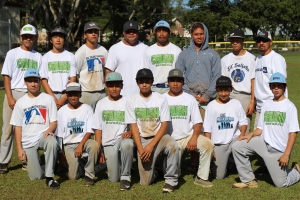 Outlaws showed their O’ahu pride as they came on during the tournament losing by 1 run in the semifinals to Maui Pono Braves and winning the 3rd place crown over Lil’ Soljahs.  In the Pony Championship, it was a battle between the two Andrews, with eventually the older group (Braves), flexing their muscle en route to the title!

In the Bronco Championship, it was an anticipated match up between Hui ‘Aumākua and Maui Pono and fans got what they wanted.  The game of the tournament came down to the last pitch!  Early on, Hui jumped out to a lead on a Grand Slam, but Maui creep back into the game and found themselves with the tying run on third with one out in the last of the 7th!  Hui’s pitcher came out with two, big strikeouts with curve balls to secure the title and keep the trophy home!  What a game!  Like I said, we might be seeing this same game in late June on the same field for a much bigger prize!  Great job Coach Chris and staff for battling all weekend!  Looking forward to an exciting time for the kids and families and it should be a memorable one! 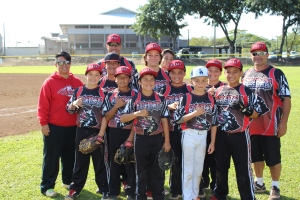 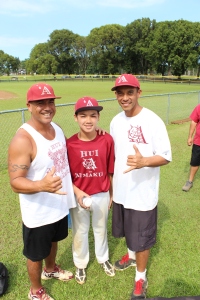 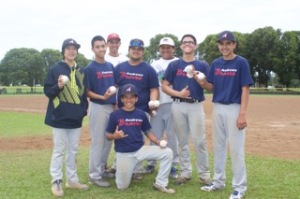 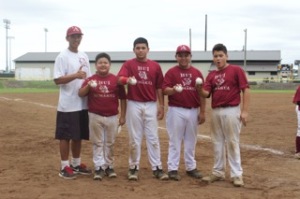 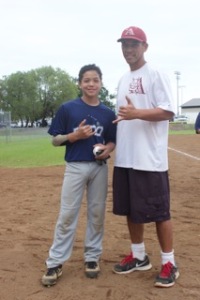 Much Mahalo to all the participants and especially Pono and Outlaws for making the trip to Hilo and being part of the Makahiki Hou Classic!  Also, we thank Orchid Isle Umpires for always being there for the kids and the game of baseball!  We are already securing spots for a number of outer-Island teams for next year!  It should be bigger and better!

As for the Mustang division, pool play wrapped up on Sunday and the championship round along with the Pinto Championships will take place in a couple of weeks on January 24th – January 25th!  A Hui Ho!

As our final weekend was upon us, the focus shifted to the younger keiki as the Pintos and Mustangs took to the field!  We also had our younger Bronco team and Pony team playing on the Victor Pony field as they get ready in some goodwill games for the upcoming season! The weather was awesome as our own Hui ‘Aumākua Pintos, fresh off their awesome run through the St. Louis Tournament on O’ahu came out and started off the weekend with a bang as they took to the diamond on our very own Dreams Park!  This year, we put up our own fence at 160’ and dressed up the field with banners and made it exciting for all the keiki!

The Mustang Division took off in the morning as games became more intense as winners advance closer to the championship game on Sunday!  Our young Broncos played a good game against Lincoln Wreckers as they work their way to regular season form!  Saturday was in the books and what a day it was!  We had a great crowd, with great food and great games in anticipation for the championships on Sunday!

Rain was in the forecast as Sunday was upon us, and sure enough, RAIN!  With the many great hands that Hui ‘Aumākua has, the games went on except the goodwill games on the Pony field!  Between sponging, raking and more sponging and raking, we manage to make it a successful Sunday!  In the Mustang Division, we managed to play the 3rd place game and Championship!  By tournament rules, the 3rd place game was a forfeit and Andrews Braves got the win.  However, we replaced Lil’ Soljahs with Keaukaha, and Keaukaha battled Andrews to an extra-inning tie, 8-8!  What a game!  That set the tone for the championship game between our own, Hui ‘Aumākua and RBI!  The crowd was ready, the field was dry and the teams were ready for battle!  RBI came out tough, scoring 3 runs in the top of the first, but answering right back was Da Hui scoring 3 of their own! Hui ‘Aumākua’s defense settled down and their bats were just too much as they built a 10-4 lead in the 4th when the rain came again!  Because it was considered a complete game, the umpire called the game and Hui ‘Aumākua took the trophy home!  Good job Boys!

Taking his last run around the Mustang bases – way to go, Kedren! 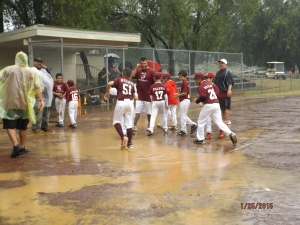 In the Pinto Division, Hui ‘Aumākua was sitting and waiting to see who their opponent was going to be in the Finals!  Eventually the rain let up and Team Elite prevailed in the semi’s over Lincoln Wreckers and was ready to do battle with DA Hui!  In the championship game, Hui ‘Aumākua’s defense was stifling, as they never looked back in the Hilo Rain and brought home the trophy, 27-0!  Way to go boys and coaches!  Focus on the task and let’s keep the train moving!

What a way to start off the 2015 year gang!  We planned, we worked and we played! Mahalo to all the hands that made all of this possible!  Thank you to all the participants and good luck in your upcoming seasons!  Thank you to my wife (Kimberly), for all of the behind the scenes work you do, none of this is possible without you!  Thank you Board of Directors (Grant, Stan, Keaka & Clemente) and Hui ‘Aumākua leaders for all that you do! Thank you Solomon and Lily Malani for your endless support!  Thank you coaches & team moms for the endless hours!  Thank you Silent Boosters, you know who you are!

Keiki, keep striving for perfection on and off the field!  Families, you know my motto, “Great Families make Great Organizations!”  Remember our Core Values Hui ‘Aumākua faithful, LOYALTY, COMMITMENT, DEDICATION!  Just remember, there are no individuals in Hui ‘Aumākua!  We all represent all of our teams from top to bottom.   Good Luck to all of our teams for the upcoming 2015 season.  We are proud of each and every one of you and let’s enjoy the ride!  And last but not least, thank you Ke Akua for blessing us with the opportunity to give back to our ‘Ohana and Keiki through this great game of  Baseball! 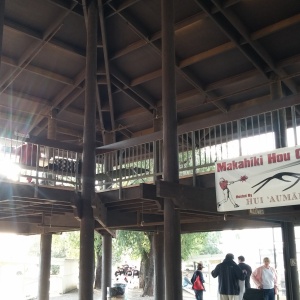 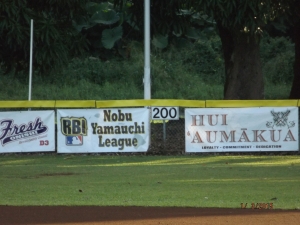